By default, the new virtual machine uses an IDE disk for Windows 95, Windows 98, Windows Me, Windows XP, Windows Server 2003, NetWare and FreeBSD guests. The default for other guest operating systems is a SCSI disk.

Linux hosts: In a terminal window, enter the command

If this is the first time you have launched VMware Workstation and you did not enter the serial number when you installed the product (an option available on a Windows host), you are prompted to enter it. The serial number is on the registration card in your package. Enter your serial number and click OK.

The serial number you enter is saved and VMware Workstation does not ask you for it again. For your convenience, VMware Workstation automatically sends the serial number to the VMware Web site when you use certain Web links built into the product (for example, Help > VMware software on the Web > Register Now! and Help > VMware on the Web > Request Support). This allows us to direct you to the correct Web page to register and get support for your product.

Linux hosts: If this is the first time you have launched VMware Workstation, a dialog box asks if you want to rename existing virtual disks using the new .vmdk extension. Click OK to search all local drives on the host computer and make this change. (On Windows hosts, you have a chance to rename virtual disk files when you are installing VMware Workstation.)

Besides renaming files, the converter updates the corresponding virtual machine configuration files so they identify the virtual disks using the new filenames.

The Rename Virtual Disks dialog box appears only once. If you click Cancel, you will not have another opportunity to update the filenames and configuration files automatically.

When you start VMware Workstation, you can open an existing virtual machine or create a new one. Choose File > New > New Virtual Machine to begin creating your virtual machine.

The New Virtual Machine Wizard presents you with a series of screens that you navigate using the Next and Prev buttons at the bottom of each screen. At each screen, follow the instructions, then click Next to proceed to the next screen. Select the method you want to use for configuring your virtual machine.

If you select Typical, the wizard prompts you to specify or accept defaults for

If you select Custom, you also can specify how to set up your disk - create a new virtual disk, use an existing virtual disk or use a physical disk - and specify the settings needed for the type of disk you select.

Select Custom if you want to

If the operating system you are using is not listed, select Other.

Select a name and folder for the virtual machine.

Each virtual machine should have its own folder. All associated files, such as the configuration file and the disk file, are placed in this folder.

Linux hosts: The default location for this Windows XP Professional virtual machine is /vmware/winXPPro, whereis the home directory of the user who is currently logged on.

Configure the networking capabilities of the virtual machine.

If your host computer is on a network and you have a separate IP address for your virtual machine (or can get one automatically from a DHCP server), select Use bridged networking.

If you do not have a separate IP address for your virtual machine but you want to be able to connect to the Internet, select Use network address translation (NAT). NAT is useful if you have a wireless network adapter on a Linux host (as bridged networking on wireless network adapters is supported only on Windows hosts). It also allows for the sharing of files between the virtual machine and the host operating system. 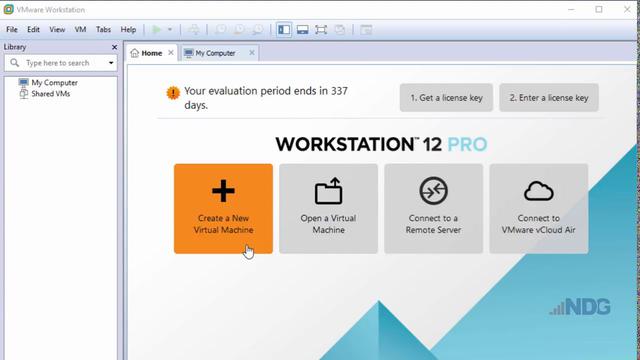 If you selected Typical as your configuration path, click Finish and the wizard sets up the files needed for your virtual machine.

If you selected Custom as your configuration path, continue with the steps for configuring a disk for your virtual machine.

Select the disk you want to use with the virtual machine.

Virtual disks are the best choice for most virtual machines. They are quick and easy to set up and can be moved to new locations on the same host computer or to different host computers. By default, virtual disks start as small files on the host computer's hard drive, then expand as needed - up to the size you specify in the next step. The next step also allows you to allocate all the disk space when the virtual disk is created, if you wish.

Caution: Raw disk configurations are recommended only for expert users.

To install the guest operating system on a raw IDE disk, select Existing IDE Disk Partition. To use a raw SCSI disk, add it to the virtual machine later with the Virtual Machine Control Panel. Booting from a raw SCSI disk is not supported. For a discussion of some of the issues involved in using a raw SCSI disk, see Configuring Dual- or Multiple-Boot SCSI Systems to Run with VMware Workstation on a Linux Host.

Specify the capacity of the virtual disk.

Enter the size of the virtual disk that you wish to create.

If you wish, select Allocate all disk space now.

Allocating all the space at the time you create the virtual disk gives somewhat better performance, but it requires as much disk space as the size you specify for the virtual disk.

If you do not select this option, the virtual disk's files start small and grow as needed, but they can never grow larger than the size you set here.

You can set a size between 2GB and 256GB for a SCSI virtual disk or 128GB for an IDE virtual disk. The default is 4GB.

You may also specify whether you want the virtual disk created as one large file or split into a set of 2GB files.

The virtual disk should be large enough to hold the guest operating system and all of the software that you intend to install, with room for data and growth.

Specify the location of the virtual disk's files.

If a SCSI virtual disk is created by default and you want to use a virtual IDE disk instead, or if you want to specify which device node should be used by your SCSI or IDE virtual disk, click Advanced.

On the advanced settings screen, you can also specify a disk mode. This is useful in certain special-purpose configurations in which you want to exclude disks from the snapshot. For more information on the snapshot feature, see Using the Snapshot.

Normal disks are included in the snapshot. In most cases, this is the setting you want.

Independent disks are not included in the snapshot.

Caution: The independent disk option should be used only by advanced users who need it for special-purpose configurations.

You have the following options for an independent disk:

Click Finish. The wizard sets up the files needed for your virtual machine.

NEXT: Windows - Error 'A Good Time server could not be located ...