Host remediation runs in different ways depending on the types of baselines you attach and whether the host is in a cluster or not.

Remediation of Hosts in a Cluster

For ESXi hosts in a cluster, the remediation process is sequential by default. With Update Manager, you can select to run host remediation in parallel.

The host upgrade remediation of ESXi hosts in a cluster proceeds only if all hosts in the cluster can be upgraded.

Remediation of hosts in a cluster requires that you temporarily disable cluster features such as VMware DPM and HA admission control. Also, turn off FT if it is enabled on any of the virtual machines on a host, and disconnect the removable devices connected to the virtual machines on a host, so that they can be migrated with vMotion. Before you start a remediation process, you can generate a report that shows which cluster, host, or virtual machine has the cluster features enabled. For more information, see Pre-Check Remediation Report.

Update Manager remediates hosts that are part of a vSAN cluster sequentially even if you select the option to remediate them in parallel. The reason is that by design only one host from a vSAN cluster can be in a maintenance mode at any time. 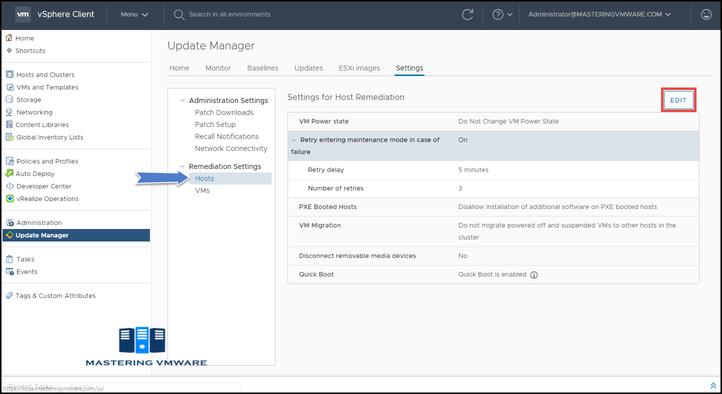 When you upgrade an ESXi6.0 and ESXi 6.5 host to ESXi 6.7, all supported custom VIBs remain intact on the host after the upgrade, regardless of whether the VIBs are included in the installer ISO. This is because ESXi 6.x hosts are binary compatible.

Host upgrade in a high-latency network in which Update Manager and the hosts are at different locations might take a few hours because the upgrade file is copied from the Update Manager server repository to the host before the upgrade. During this time, the host stays in maintenance mode.

With Update Manager 6.7, you can remediate hosts of version ESXi6.0 and ESXi 6.5 against offline bundles that you have imported manually.

You can stage patches before remediation to reduce host downtime.

PREV: How To Start Your Own Rust Server With Friends

NEXT: Solution for could not connect to one or more vCenter Server ...