How To Start Your Own Rust Server With Friends

Rust is best when played with friends, which is why so many players desire to know how to make their own private servers. First and foremost, these are free servers, unlike other dedicated servers that you might have to buy. However, it does take a degree of computer literacy in order to make it work, so make sure to have your very best techy friend on standby.

When you have your own server it is easier to learn the game, play around with base designs, and enjoy time with friends before being murdered by hordes of naked players with spears. One thing to keep in mind is that you need to make sure that your computer can handle hosting and playing at the same time, otherwise you might end up with a poor experience.

Updated July 5, 2021 by Rebecca O’Neill: One aspect of Rust that many players don’t know about is the ability to create private servers with their friends. However, you probably don’t realize exactly why anyone would want to do this when there are so many great servers already out there for you to join. It does take a great deal of work to set it up, but it is worth it in the end due to the pros of creating a personal server.

Whether you plan to do this or not, knowledge of the process behind how to make your own server will give you a deeper understanding of the game. It will allow you to know what the different servers entail and what settings have been adjusted that make each Rust game entirely unique.

Why Should You Make A Private Server With Friends?

There are several different reasons you might be considering a private server, and the most common is to create a place where you can mess around with your friends. It is hard to gain a foothold in some public servers that have regularly full lobbies, and some players just want to experiment in a world that is entirely their own.

Some choose to use it for practice, while others actually open up their private servers to paying subscribers. There are others who desire to hold a special event or want an entirely unique map where they don’t have to search for a server with all of the settings they desire.

PVE servers have been added into the mix, but some would still prefer to have one that is entirely their own. However, if you find the process of creating your own private server too taxing then you can always find an empty server to join and hope no one besides your friends also decides to enter.

The first step is to make sure your computer can handle the game so you don't have to deal with excessive lag when using your furnace. This is still an important issue whether you are playing and hosting on the same or separate systems. You also want to check your internet connection speed and make sure you go with a wired connection to eliminate lag.

The requirements are as follows:

Now that you have the right PC, this is the tricky part that can become a little confusing. First, you will need to install something called SteamCMD, which is similar to a blueprint and allows players to install and update servers on Steam and it utilizes a command-line interface.

You need to install one of the two items below based on your operating system:

Once the file is downloaded onto your computer, you now want to create a new folder on your desktop and name it Rust Server. Next, find the downloaded SteamCMD file location, open it, and move this file to your new desktop folder:

Now you can open this file from its new file location and wait for it to load, which can take a few seconds as it updates.

You don't want to use your actual profile on Steam for this server as then you will be unable to play the game and host at the same time. Instead, you are going to use the system utilizing an anonymous login. 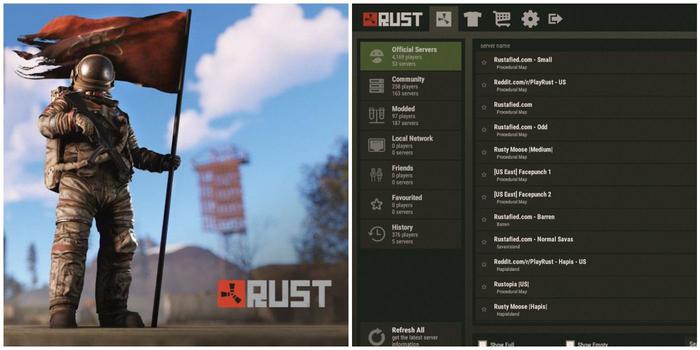 This is made possible by clicking to the bottom of the command-line system and typing in this phrase:

Next, hit enter and then type in this phrase onto the command-line:

Hit enter one more time and then wait for it to load the necessary information, which is when many Rust players might pull out their acoustic guitar. This can take some time, but you know it is finished when it says this at the bottom:

You might not know what an update batch file is, but all you need to know is that it will ensure your server is always updated with the newest decorative items. This is especially important if you plan to keep it live for more than a single day, which most players do.

Now you need to click on the Rust Server folder on your desktop and create a new text document (.txt) within it by right-clicking, scrolling over new, and clicking on it.

You want to name the new text document the following:

You then want to open this new file and type in the following commands exactly as shown:

Once done, save the document, close it, and then change it to an executable batch file by changing the name of the text file to this:

Now you can close the SteamCMD command-line interface.

You want your batch update to work so you need to start it by doing the following:

Once this is done you need to type the following commands into the new text document you just created with the bullet points being separate lines:

However, you can change the world size, world seed, map type, and player count and the numbers for the world can be any of the following:

You can also change your server hostname to be whatever you want it to be as this is what will show up on the server list on rust, and some choose to name it after their favorite tool. Once you have it set to your preferences, you need to change this text document to a batch document by changing the name to this:

Finally, you want to open the file and it will essentially load the server, so you want to keep this window running.

Load The Server On Rust

Now that you have created your server you want to start Rust, and in the main screen hit F1 to pull up the command-line.

You need to type this into the line and hit enter:

It will then pull you into the server you have created so you can start navigating the Train Yard and from here you can invite your friends to your brand new private Rust server that you have created!

Next: Rust: Tips For Navigating The Water Treatment Plant

You have options when it comes to picking a build for Lann in Pathfinder: Wrath of the Righteous — here are the best ones.

Rebecca O'Neill is a reader and writer based in Ohio, near the heart of the CLE. She enjoys playing a wide variety of video games and spending time with her husband and son when she's not writing.